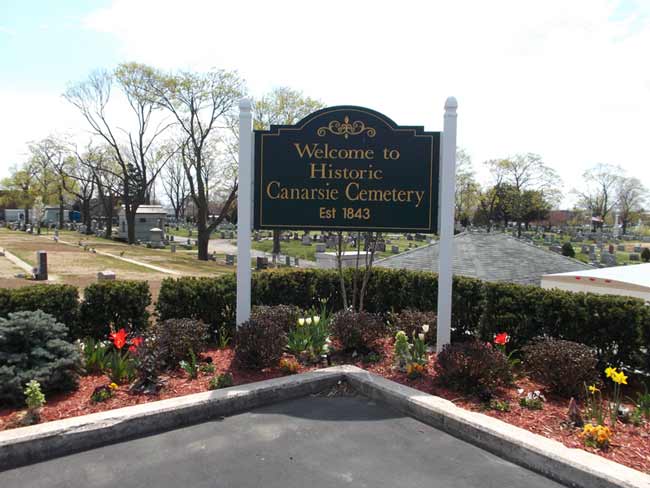 When we purchased Canarsie Cemetery we never expected such a big community welcome. The sale officially went through August 30, 2011 as noticed here: Canarsie Cemetery Ownership and Management Transferred to Cypress Hills Cemetery which garnered an annual savings of $350,000 for NYC in salaries and upkeep.

Almost immediately after taking over, neighborhood news sources were reporting about the positive effect the sale has had on the neighborhood. We began making changes, cleaning up the place, installed wrought iron fencing and added more grave sites.

Brooklyn Daily wrote a piece about us here: Canarsie Cemetery resurrected!
“I met a woman on Remsen Street two weeks ago who told me, ‘Welcome to the ghetto cemetery’,” Russo recalled. “But I told her it was going to change. I’ve seen other cemeteries in worse condition. [Canarsie Cemetery] is a quaint community cemetery that just needed a little TLC.”

The New York Times acknowledged us here: A Place of Final Rest Changes Hands
“But now, a generation after the first sale attempt in 1982, the city has found a taker. Cypress Hills, a 225-acre cemetery in Brooklyn, has raised enough money to land the deal.”

More changes are on the way in reviving this piece of history and breathing new life into a piece of Canarsie that desperately needed it.

“Our consultants and engineers worked on revitalizing Cypress Cemetery, so we were prepared and we knew what challenges we were taking on with Canarsie Cemetery,” he said. “But we’re willing to spend the money so that people in the community can stay close to their relatives when they’re put to rest.” As noted here in the Canarsie Courier: Welcoming Improvements Ongoing At Canarsie Cemetery

We were amazed at the amount of people that put up websites dedicated to Canarsie Cemetery or included snippets on their social media. We’re proud to be renovating such an important part of Canarsie history and the community has been so gracious.

There’s a homestead site run by Gene Potter here: Canarsie Cemetery with a little history and some unique photos of the cemetery. It lists a few of the community notables that are buried here.

Mark Miranda uploaded a video of 30 seconds of footage from before we took over:

Forgotten NY gave us a mention with some photos here: Canarsie Cemetery

I can go on and on, but you get the idea. We’re part of the community, we have a history and the more we delve into our past, the more we see why our renovations, updates and coiffing of this quaint cemetery in Canarsie, Brooklyn means so much to our neighbors, and now to us.